Since the beginning of sea travel, visitors and traders from foreign lands have crossed the Indian Ocean in search of the riches and natural wonders of Sri Lanka. Traders and invaders have come and gone; remnants of their legacy evident only by the infusion to the islands culture and the derelict remains of their transportation, once mighty symbols of trade, commerce and imperial power, now mere echoes from the past resting beneath the waves of the coastal seas. These are the ancient ship wrecks of Sri Lanka, testimonials of a rich and long cultural history and portals from the present to a bygone era that once were.

Based on historical records there are over 200+ estimated ship wrecks around the coast of Sri Lanka. Many have been located and can be dived to. The search for wrecks continues to this day using advanced resonance scanning technology. Five hundred years of trade, commerce, conflict and war from the times of the Portuguese, Dutch and the British resulted in vast amount of shipping traffic all around the coast of Sri Lanka and thus the reason for the proportionately high number of wrecks. 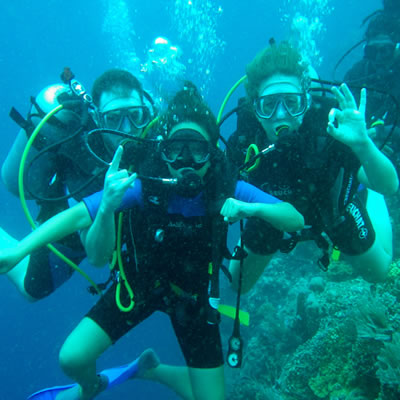 Listed below are few of these very famous ship wrecks around Unawatuna that are hundreds of years old. Wreck diving in Unawatuna is an amazing experience not to be missed by any diver visiting this land.

The Conch (Hikkaduwa) A "should do" dive for the wreck enthusiast! One of the favorite dive sites.

Earl of Shaftesbury (Hikkaduwa) An old British iron sale ship. Literally a "wreck" but significant components are still recognizable and a decent dive experience on a sandy bottom.

Arcturus (Galle) A British steam ship built in 1870. An area known as the "Mada Gala" or the "Brown Rock" close to Galle is the final resting place of this ship.

Avondster (Galle) The Avondster, owned by the Dutch East India (VOC) company (but originally and English sip), was partly loaded with Areca nuts when it sank after slipping anchor and hitting the shore. The site is 50 M away from the Marine Drive in Galle and lies in the heart of the Harbor.

Bottle Wreck (Galle) An unknown ship lying on a sandy bottom in front of Galle harbor.

Crispigi Cross (Galle) The Cross had it's cargo holds full of rice and paint when it sank in front of the Galle Hospital in the 80's.

Dolfijn (Galle) A VOC ship sank in the Galle Harbor. because of neglect and poor maintenance. The crew was too exhausted to operate the ship properly after operating the pumps day by day to keep her from sinking as she had taken in a great amount of water.

Ethopy (Galle) The Engine and many large sections of this cargo ship can be explored.

Hercules (Galle) Discovered in 1993 by the Western Australian Maritime Museum which was assisting the Government of Sri Lanka conserve the extensive legacy of wrecks around Sri Lanka (Galle Harbor. Project). The wreck was discovered with the finding of a heavily encrusted bronze bell with the inscription 'AMOR VINCIT OMNIA ANNO 1625' . A search through the Dutch Archives and a 17th century map of Galle placed the bell at the same location of the wreck. About 30 large Cannons were later located from the same site (South of Gibblet Island)

Lord Nelson (Galle) A modern boat that sank in a storm in the year 2000.

Rangoon (Galle) This is a sailing steam ship built in 1863 and sank just outside the Galle harbor after striking the outer Kada rock while here engines were shutdown while loading local mail enroute to Australia. Quite a scenic wreck with shoals of Snappers and a popular dive from Unawatuna